This will be the last post on this Blog. Blaine has taken over from Emrys and his new Blog can be found at this site.  Blaine's Barks

The new Bog is still being put together so it's layout is still is still a little rough. Please be patient. Like Blaine says, "It's a work in progress".

The Decision Is Made and Tomorrow's The Big Day

Jim and Linda have been busy trying to figure out what to take to the house and what to keep in me to transfer to their new (to them), Motorhome. They've probably taken more to the house than they should have, but until they actually get the Motorhome, they really won't know just how much will fit into the smaller cabinet space and storage compartments.

The other day, (I think it was Monday), Laura brought Anna to the house to see it. If you remember, Anna lives up in Jacksonville and was down here to visit.

Anyway, both Jim and Linda said that it seems like Anna really liked the house and she and Laura even helped Linda make some changes to the curtains in the Florida Room which runs across the front of the house.

OK, it's time to announce who's going to take over this blog.

After much persuading, Blaine, (Jim and Linda's pet), has agreed to give it a try. He's really hesitant, but I've assured him that all of my followers have been very understanding when I made mistakes and that I was sure that you would be tolerant with him too. 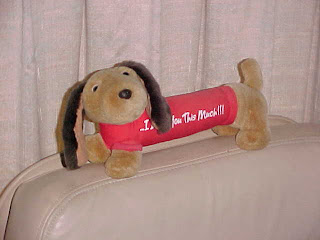 So,  ,  ,  ,  why Blaine??? Well to be honest, he probably knows more about Jim and Linda than most anyone else. He's been with them since before they went full-timing, he's traveled to all the places that they have gone during the last 12+ years, and he will be in the RV when they're traveling and in the house when they're not.

He could even ride along when Jim and Linda take CLT (Cute Little Truck), someplace! ; )

I don't know just yet how we'll make the transfer, but in the next couple days, he and I will get it figured out. I've helped him start a new main page, so there will be a new URL. There's no post on it yet, but I'm sure he'll post in the next few days. As soon as he gets the page set up and makes his first post, there will be a link to it here.

After that, Jim and Linda will bring the new MH back here to Highbanks and someone from the dealership will come an take me to the dealer's lot.

A little about my time with Jim and Linda.

I've had a great time, and it's been fun taking them to the places they wanted to go. I'm really sorry that I'm just too big to go to some of the parks that they want to go to though. Jim says that he really likes how I handle the Interstates, and both of them seemed to have really enjoyed my spacious interior, but they both like to get "off the beaten path" when they travel, and, as Jim found out, I'm really too large to do that comfortably. (At least for him).

I also understand that since they've decided to buy the house that I'm just too big for their needs. There's really no sense putting a 45' MH in storage for at leas 1/2 of the year and in fact, it would be very hard on me.

So, hopefully I'll find someone who wants to travel long distances and stay in larger RV parks. I'm sure I will. I'm really in pretty good shape for my age.

All in all, I've had a great time and have enjoyed writing this blog. I'll miss Jim and Linda, their family and all of their friends that I've met, but things change and I'm used to that. After all, I am a house that has wheels, and I never know where I'll be on any given day.

Did you know that today is "Oreo Cookie Day"?


It felt really cold here yesterday. I don't think the temperatures ever got out of the 50's and there was a 25 to 30 mph wind blowing most of the day. That didn't stop Jim, Lindsey and Denny from moving Linda's recliner over to the house though.

Denny came over around 10:00 and Lindsey and Laura came just a short while later. Within a few minutes, the guys had the legs off of the chair and were very carefully maneuvering the chair down my steps and through my door. With the 3 of them, it went pretty well and soon the chair was in the back of CLT and on its way to the house.

Getting the chair into the house was much easier because of the wider doors and steps, and soon it was sitting in the living room with it's legs back on. : )

By a little after 11:00 Jim and Denny were back here and Laura and Lindsey were back home.

Denny had seen a little of the house when he helped to take the chair over there, but Bev and not, so  about noon, Jim, Linda, Denny and Bev headed over there.

After taking a tour of the house, everyone sat and talked for awhile. This is Bev relaxing on the love seat, 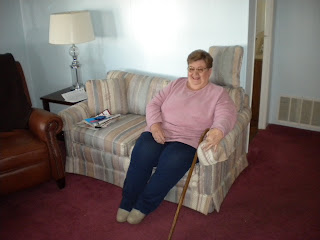 and Denny and Linda relaxing on the couch. 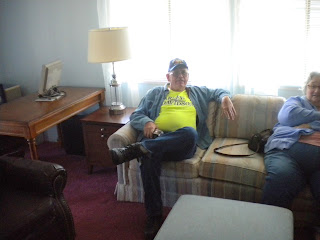 After visiting for awhile, everyone came back here to the CG. Denny and Bev went to their RV, Jim was tired, so he took a little nap, Linda watched some TV. Later in the afternoon, Linda put together a ham casserole and baked some brownies. Then around 6:00 they headed over to Denny and Bev's where they all enjoyed a very nice meal of casserole, corn, warm bread and brownies.

Around 8:00 Jim and Linda came back here and then watched TV until bedtime.

Another very good day with family and friends.

Thanks everyone, for all your help.

Today, Denny and Bev will be leaving. : (   They have reservations at a campground on the coast North of Daytona. They'll stay there for a few days before heading up to S. Carolina to see Denny's sister and then heading back to Illinois.

Did you know that March is "Adopt A Rescued Guinea Pig month"?

Oh!!!! And thanks everyone for the great comments and congratulations that you left on yesterday's Blog!! They are very much appreciated.

I knew that Thursday, Jim and Linda were going to head over to an RV Place, (LaMesa RV), near here to start looking for a Class C to take my place, but I never imagined that on their very first day of looking, they'd find one!!!!

You could have knocked me off of my jacks with a feather!!!!! : O

The RV had just been traded in and wasn't even cleaned up yet so Jim and Linda got to see it before the dealership did their "magic" on it to make it look nice. Both Jim and Linda said that it definitely needed cleaning, but nothing in or on it seemed to be excessively worn or abused. And, Jim said that when he took it out for a test drive on city streets, 2 lane roads and the Interstate, it handled very well and seemed quite stable for a Class C.

Now, this brings us to a big change of plans for Jim and Linda!!! If you remember, they were scheduled to leave here this Thursday and they were going to head out to try to find an RV. Well, being that they've already found one, they have decided to stay here at Highbanks for an additional month, get the new RV all set up and ready for their summer travels and leave Florida on or about the 7th of April.

By this time, they should also have the house ready, and have most everything set for their return this fall.

Early yesterday afternoon, just as Jim and Linda were coming back from taking more "stuff" over to the house, Denny and Bev arrived here at Highbanks. Their Winnebago Brave is parked in a site just a short distance from me. Denny has been over here to see me and yesterday evening, Jim and Linda went over there and had a nice meal of Pizza with them. Then, after talking for a couple hours, Jim and Linda came back here and watched TV for awhile before heading to bed.

Both Jim and Linda said that it was really good to see them again, and are really glad that they were able to stop by for a couple days. : )

This morning, Denny is going to help Jim and Lindsey move Linda's recliner over to the house. Like I said, it's probably going to be quite a job to get it out of my door because even with the wooden legs taken off, and the chair turned on it's side, it's as wide as my door.

It came in through that door though, so they should be able to get it back out. ; )

Then, this afternoon, Jim and Linda will take Denny and Bev over to the house so they can see it. They are some of my faithful Blog followers, so they have some idea of what it looks like, but would like to see it in person.

OK!!! I know this post is getting quite long, but I have just one more thing I wanted to tell you about.

I think I may have found someone to take over this Blog!!! : )   It's still too early to tell for sure but I think I've convinced him to do it. I've agreed to help him get started and we have already gotten some of the intro and the layout of it set up. He hasn't totally agreed to to this yet, but I'm confident that with a little more help, I'll be able to convince him that he can do it and that it will be fun.

Did you know that yesterday was Jim and Linda's 28th wedding anniversary?

Myrddin
Hello, I'm Blaine. I've taken this blog over from Emrys who took it over from Myrddin. For 12 years, (2001 to 2013), I traveled with Jim and Linda in various Motorhomes, full-time. Jim and Linda have now purchased a double-wide home in Florida and will continue to travel in a 26 foot Heartland North Trail travel trailer that they tow with a Dodge 2500 quad cab, diesel pickup truck. I will attempt to keep you up-to-date on their travels and also the time they spend in their home. Hope you enjoy this Blog. 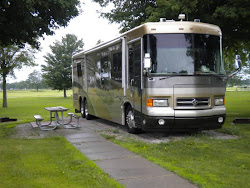